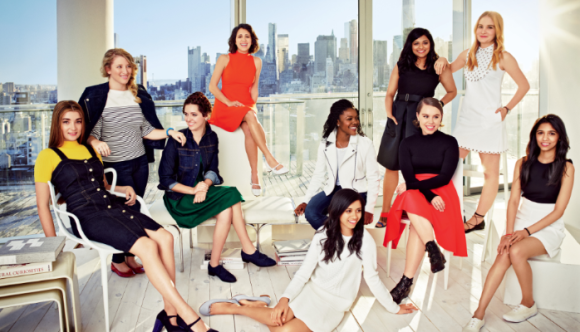 This past month, I had the honor of officially being named one of Glamour magazine’s Top 10 College Women (TTCW) for my work on The Prospect. The 58 year-old competition recognizes outstanding college women for their leadership, community involvements, and academic excellence. Anyone who’s seen me in the past month knows I’m still hyperventilating about being on a list where past winners include businesswoman/TV personality Martha Stewart, legendary editor Kate White, and Olympian Allison Schmitt. Go Team TTCW!

In addition to the plethora of perks that come with winning (including being in the May 2015 issue of Glamour — go pick up a copy!), part of the prize included heading to New York for three days and having the opportunity to network with many impressive and incredible women.

Rockstar ladies at Glamour, LinkedIn, and Google showered us with really important tidbits for taking on your career (I have a notebook full of them), and after the awesome people at LinkedIn asked us to write about our TTCW experience, I decided to share a couple of lessons that really resonated with me.

1. Take Networking into Your Own Hands

Several women at all of the different events we went to touched on this: Networking is about taking initiative, and a lot of times, women fear being a burden by reaching out and asking others for advice or help. When do ladies feel like they’re being even more intrusive? During the follow-up.

At least five different women we talked to mentioned importance of following up with people, especially after they’ve failed to respond to your first attempt at contact. Several women noted that they actually won’t respond to people seeking help or mentorship until the second email, because it shows that those people really want to get in touch and get that help. Also, try not to take networking too personally: Half the time, people don’t respond because their inboxes are full and they just didn’t see your message. The bottom line? Follow. Up.

Speaking of fun networking lessons, a cool pro tip: Create a list of people to email regularly with career updates (and maybe a couple of personal facts, too). It’s like a super snazzy holiday card, except it briefly lists your professional accomplishments and also opens up the opportunity for people to connect or re-connect with you. I’ve already decided to start sending these in June and December every year, so the First Semi-Annual LKHerman Letter o’ News will be rolling out in about a month.

Lesson: Carpe networking (my Latin is a bit rusty).

What’s actually kind of hilarious about being a winner of something that labels you one of the « Top 10 College Women » is that it makes you want to be more modest about what you do. I noticed that all of us were sort of downplaying our accomplishments around many of the people we met.

Just to get the bragging on for some of the ladies in my TTCW class: Shree Bosejust casually raised $280,000 for her social enterprise Piper, Mariah Stackhouse has a golf record at Stanford that ties that of Tiger Woods, and Niki Acton has had her plays produced in New York City. But why aren’t we shouting these impressive accomplishments from the rooftops?

As many of the people we met pointed out, women have the tendency to sell themselves short for fear that giving themselves any credit is excessive bragging. I know I can personally attest to doing this even on campus when people ask me about what I do (« Uh, I run this website… »). Being okay with not selling myself short as just « a blogger » is something I need to pay more attention to.

Lesson: Give yourself some (actual) credit.

One of the coolest things Tiffany Dufu, Chief Leadership Officer at Levo League, discussed was how she blocks out time in her schedule every week to meet with and mentor young women on top of her job and all of her other responsibilities.

Lots of people (women, men, executives, the works) talk about the importance of « paying it forward, » but few actually give concrete examples of how they do so on top of a full-time schedule, which is why Dufu’s work really resonated with me. It’s also important to keep in mind that helping other women out doesn’t have to start after you become a powerful and successful person; even just aiding your peers when they need it can make all the difference.

Lesson: Helping people out is more than just good karma.

What are some important lessons you have the future generations of women coming up the career ladder? Sound off in the comments below or let me know on Twitter!

Lily Herman is co-founder of The Prospect, the largest student-run college access organization in the world. In addition to her work on The Prospect, she also works with USA TODAY, The Muse, HelloFlo, and Her Campus. In recent months, her work has been featured on Newsweek, Mashable, Forbes, TIME, and Lifehacker. You can follow The Prospect on Facebook and Lily on Twitter.